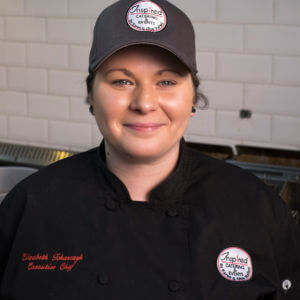 Chef Elizabeth J. Tokarczyk received her culinary degree from Le Cordon Bleu, where she received intensive and practical hands on training in classical French Cuisine. Liz began her career in the off premise catering world shortly after graduation at Limelight Catering. During her tenure at Limelight, Liz quickly worked her way up the corporate kitchen ladder until she was the Head Chef and solely responsible for creative menu development and Kitchen Management.

From there her experiences include working as the Executive Chef at Hearty Boys Catering and the Executive Catering Chef with Berghoff Catering. The culinary field is her passion – “It’s what I’ll do for the rest of my life.”

Her creative culinary style is mostly Eastern European influenced from family, however Latin flavors take the forefront. She enjoys sourcing ingredients from local farmers markets and believes in local sustainability. “Shopping at these venues makes me weak in the knees!”